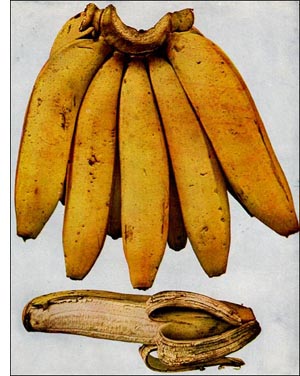 The Banana Plant is herbaceous and dies down to the ground after fruiting. The true stem is underground and perennial, sending up new shoots each season, which grow rapidly and in a few months bear ripened fruit.

The stalk that bears the flowers grows to a height of from fifteen to twenty feet and is surrounded by the sheathing bases of the leaves. The flower cluster or spike is terminal and from two to four feet in length and nodding. The oblong leaves are dark green in color, from five to ten feet in length, and from one to two feet in width. The beautifully arching leaves and the pendulous cluster of
flowers or fruits form an attractive foliage and make the plant a noted ornament for the garden.

The many varieties of both the banana and plantain, which vary in taste, color, form, and size, are very widely distributed throughout the world, being usually found in a zone bounded by 38 degrees north and 38 degrees south latitude. It is said that a single plant will produce, on the average, in one year three bunches of fruit weighing fifty or more pounds. The amount of labor required in its cultivation is very small, especially in the older plantations.

The number of bananas on a single stalk of the ordinary variety varies from about one hundred to two hundred, with an average of about one hundred and thirty. When a plantation is fully developed growth is so rapid and so constant that ripe bunches of fruit may be gathered each week.

For the best results a good, fertile soil is required. It is interesting to note that but little moisture is needed, for the plants attract water, either from the air or the waters deep under ground, and the surface of the ground is always moist even in a time of unusual drought.

The stalk that bears the heavy bunch of fruit, occasionally weighing as much as eighty pounds, may be easily cut down by a single stroke of a scythe or a machete.