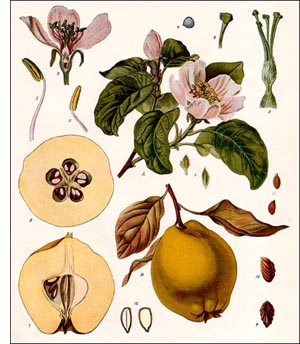 The Quince is the pear-like fruit of a bush or small tree resembling the pear tree.

The branches are spreading and of a grayish-green or brownish-green color. The leaves are simple, entire, ovate, with short petioles and distinct stipules. The lower surface of leaves and stipules, as well as the young twigs and the sepals, are densely covered with hair cells, producing a woolly appearance.

The flowers develop in May and June and are usually solitary upon terminal branches. Calyx green, with five foliaceous, serrate, reflexed lobes. Corolla of five separate ovate, rather large pink petals.

Stamens yellow, numerous (twenty) ; five styles and a five-celled ovary. The matured fruit is a pome; that is, the greater bulk consists of the thickened calyx enclosing the ovary. The form, size, and color of the ripe fruit are shown in the illustration. Each cell of the ovary bears from six to fifteen seeds, which resemble apple seeds very closely as to form and color.

On account of its astringency it has been used in dysentery, hemorrhage, and other conditions requiring an astringent substance. At present it is little used, the seeds excepted.

The pulp is fibrous and tough; it is not edible in the raw state on account of its acrid, astringent taste. As a whole, it is a discouraging and disagreeable fruit, in spite of its beautiful yellow color and pleasantly aromatic odor. Mixed with apples, it makes excellent pies and tarts. A marmalade is made from the pulp; also a delicious jelly.

The seeds are extensively used, on account of the mucilage of the outer surface. A decoction commonly known as mucilage of quince seed is much used as a demulcent in certain diseases-in erysipelas, inflammatory conditions of the eyes, and in other affections where mucilaginous applications are found useful. Most of the quince seed of the market comes from southern Russia, southern France, and the Cape of Good Hope. It is, cultivated in various temperate and sub-tropical countries.