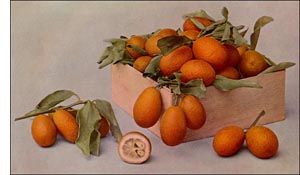 The Kumquat, which is esteemed by many persons a great delicacy, is the fruit of a low bush. It is a native of Cochin-China or China and is extensively cultivated in Japan, California, and Florida.

The smooth, angular branches bear a dense foliage of dark green leaves. It is a dwarf member of the citrus group, rarely growing to a height of over eight feet, and is closely related to the orange, the lemon, and the lime.

The tree or bush varies greatly in size, but, whether large or small, it will produce a plentiful supply of fruits. As an ornamental pot plant for house decoration it is a beautiful evergreen, blooming freely during the spring and early summer.

The flowers, which are like those of the orange tree, are small, sweetscented, white, and either clustered or solitary in the axils of the leaves.

The fruits are orange colored and in form either ovate, oblong, or spherical. The transverse section of the fruit very closely resembles that of the orange and shows either five or six cells and quite large seeds. The pulp is sour and slightly bitter, while the rind is sweet and somewhat aromatic. Both rind and pulp are eaten and the combination of flavor and taste are greatly admired by many persons.

Two varieties of kumquats are grown in the United States; the Marumi, or round kumquats, and the Nagami, or the oval or oblong forms. The trees that bear the round variety are slightly thorny and the fruits vary from about three-fourths to one and one-quarter inches in diameter. The oval or oblong forms are borne by trees without thorns and have a diameter of from three-fourths to one inch and a length varying from one and one-fourth to two inches. These are more highly esteemed than are the round fruits.

Though eaten while fresh, this fruit is extensively used in making a preserve and marmalade. It is also candied, and is used as a flavor in confectionery.