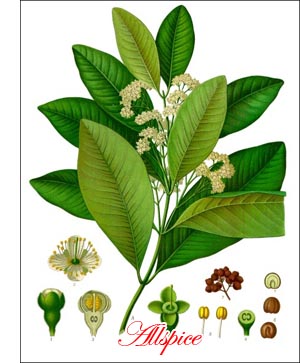 Allspice, also commonly called pimento (Pimenta officinalis), is a tree native to Jamaica and other West Indies and Central America. It has sometimes been referred to as Eugenia pimenta. The tree attains a height of 15 to 40 feet and bears opposite shiny leaves. The leaves contain an essential oil which is used like that of Pimenta acris in the preparation of bay rum.

The flowers of the allspice tree are small and white and the tree bears a purple one-seeded fruit about the size of a pea. In ripening the fruit loses much of its aroma. It is therefore picked before fully ripe. The fruit clusters are cut from the tree with a crook or curved knife at the end of a bamboo pole, or if more convenient the branches are pulled down with a curved stick and the fruit clusters clipped off.

The fruit is dried in the sun for 3 to 12 days or in a fruit evaporator, after which the material is ready for market. Allspice is propagated by seed, the planting distance being about 20 by 20 feet. The bush begins to bear at about 8 years of age and reaches full bearing at 15 years. The average yield of mature trees is about 75 pounds of dried fruit per tree per year.

At present the worlds supply of allspice comes chiefly from Jamaica, which country exports about 11,000,000 pounds annually. An oil is extracted from the pimento fruit and is sold under the name pimento oil. The commercial allspice is not closely related to other plants which sometimes bear the name allspice with certain qualifying adjectives.

Carolina allspice, for example, or sweet-scented shrub, bears the botanical name Calycanthsts floridus and the wild allspice of the Northern States is Lindera benzoin.