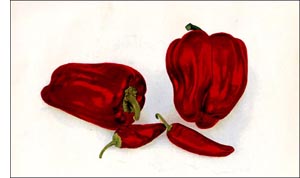 Red Pepper is a spreading, typically herbaceous plant belonging to the night shade family. Stems are soft and green in color. Leaves are simple, margin entire, ovate, pointed, and stalked. The flowers are not especially showy, white, single, axillary, rarely in twos. The fruit, which is botanically a berry, is green at first, changing to bright red on ripening. It varies in size and form.

The fruits are usually collected before they are fully ripened, while they are still of a green color, and dried, whereupon they assume a bright red color characteristic of red pepper. They have a very pungent taste and constitute one of the most highly prized and most extensively used spices, being added to soups, sauces, meats, salads, mixed pickles, etc. It is a very useful, stimulating tonic, especially indicated in what is known as atonic dyspepsia, or dyspepsia due to a sluggish action of the secreting glands of the stomach.

As a spice the powdered dried fruits are used. For pickling the green fruits are preferred. The small pods known as chillies are used principally in preparing a sauce universally known as chili sauce. Red pepper is frequently used as an adulterant of vinegar and brandy, to produce the desired pungency. It is stated that an excessive use of red pepper produces disorders of the stomach, which is apparently not true from the experience of those of the tropics, who consume it in enormous quantities. Red pepper has been employed in the treatment of rheumatism, gout, as a gargle in tonsilitis, sore throat, etc. Its principal use at the present time is that of a spice and as a remedy for atonic dyspepsia. Powdered red pepper is added to snuff, and it is certainly very effective in causing sneezing. Those who work with red pepper find it necessary to protect the nostrils against the irritating fine powder.