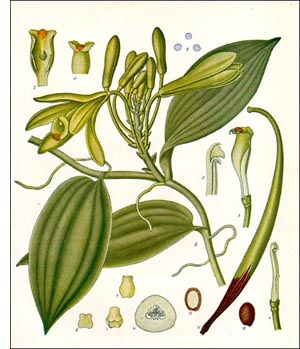 Vanilla planifolia belongs to the Orchid family, though it has many characteristics not common to most members of the family. It is a fleshy, dark-green, perennial climber, adhering to trees by its aerial roots, which are produced at the nodes.

The stem attains a length of many feet, reaching to the very tops of the supporting trees. The young plant roots in the ground, but as the stem grows in length, winding about its support and clinging to it by the aerial roots, it loses the subterranean roots and the plant establishes itself as a saprophyte, or partial parasite, life habits common to orchids. The leaves are entire, dark green, and sessile.

Inflorescence consists of eight to ten flowers sessile upon axillary spikes. The flowers are a pale greenishyellow, perianth rather fleshy and soon falls away from the ovary, or young fruit, which is a pod and by the casual observer would be taken for the flower stalk. The mature fruit is a brown curved pod six to eight inches long, smooth, splitting lengthwise in two unequal parts, thus liberating the numerous very small oval or lenticular seeds.

There are a number of commercial varieties of vanilla named after the countries in which they are grown or after the centers of export, as Mexican, Vera Cruz, Bourbon, Mauritius, Java, La Guayra, Honduras, and Brazilian vanilla. The most highly valued Mexican variety is known as Vanilla de leg (leg meaning law). The pods are long, dark brown, very fragrant, and coated with crystals. Since vanilla is a costly article, adulteration is quite common. Useless pods are coated with balsam of Peru to give them a good appearance. Split, empty pods are filled with some worthless material, glued together, and coated with balsam of Peru.