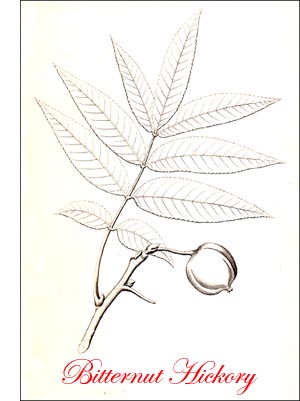 Hickories are North American trees-none now inhabit any other part of the world. There are twelve known species, one of which is Mexican; the remaining eleven are restricted to the states east of the Rocky Mountains. Arkansas assembles the whole group within her borders and offers a great opportunity to the student of the genus Hicoria.

Once Europe had numerous species of this genus, and there were others in Greenland and in the west of North America. The ice cap wiped them all off the face of the earth; the only record of them is in the Tertiary rocks. After a century of effort, only a few good specimen trees are to be found growing in Europe. The species thrive only in their natural range. There are reasons for believing that these trees will grow well in Japan and eastern China.

No group of trees has higher qualities than the hickories. The wood of most species is tough, strong and flexible-especially valuable for farm implements, tool handles and the like. There is no other fuel that excels dry hickory for heat and brilliancy of flame. No other of our trees bear such valuable nuts. No finer tribe of shade and ornamental trees is to be found. With all their positive good qualities, the hickories have scarcely a bad one. The worst thing you can say of any hickory is that it is not quite up to the family standard.

The Indians knew the value of these trees before the white man came. "Hickory" is an Indian name. The Creeks and Algonquins gathered the nuts into their storehouses in the autumn. The squaws pounded shells and all in water, until the latter became a milky emulsion. This became the Indian drink," powcohickora," after it had fermented. Added fresh to venison broth it made a rich food, very agreeable to European palates. (Of course the shells went to the bottom of the pot.) The "hickory milk," strained of its shell fragments and thickened with meal, made corncakes fit for a king! It was used also in cooking hominy. An oil pressed from these nuts was staple in early cookery in the colonies. The Virginians learned its use from their Indian neighbours. It was considered equal to olive oil in flavour, though no attempt was made to refine it.

Many insects prey on hickory trees. None of these unfit them for dooryard planting, if one keeps close watch to poke out early the nests of fall web-worm and kindred pests. Many of its enemies are borers which work in the wood. The twig pruners are an interesting tribe; and some of our most beautiful silk spinners and underwing moths live their youthful days out on the foliage of hickory.

What can that sound be that comes out of the backlog, like the creaking of the old rocking chair in the chimney corner? It has been heard every night when the family gather around the fire, and it has a weird, ghostly sound. A plump young hickory borer, deep in the wood, is whetting his teeth on the walls of his burrow.

He is safe, for hickory burns very slowy, and the backlog is good for many a day yet. Probably before the stronghold of the youngster is reached he will have ceased his gnawing, and fallen asleep in a chrysalis. Then of a sudden, some March night in the midst of a thrilling tale told by the firelight, a strange visitant will appear, startling the whole company, and interrupt the story.

It is an elegant grey beetle, with horns of surprising length, made of jointed rods. After a long and arduous youth spent in the dark channel of his own making, he has come forth into the light equipped with wings, and ready to mingle with his kind in a life of which he has probably not dreamed before. Who would be so inconsiderate, so inhuman, as to cast this handsome creature into the fire! Certainly nobody who knows anything about the old life he has left behind him, and the new life that lies before. Take him, rather, to the window, and as he flies forth into the night take up the story where it was broken off.