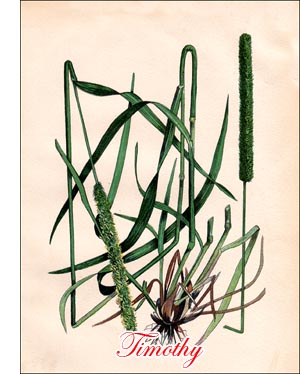 In many of the states Timothy is one of the most common of cultivated grasses, and it is, perhaps, the one most generally known and easily recognized.

By waysides and in fields its bright green bayonets rise, stiff and rigid, and tipped with cylindrical flowering-heads which bloom at about the same time as Red-top, a grass with which this species is often associated in the fields, though Timothy is noticeable earlier in the season, when the sunlight, touching the tips of the spikelets, seems to gem the spikes with dew-drops.

The flowers are densely crowded, and in bloom the anthers, borne on long filaments, increase the apparent size of the heads by encircling them in filmy lavender.

The stalks, in rich soil, are sometimes five feet tall, with blossoming heads six to ten inches in length, but in dry places the plant is much smaller, and by developing bulbous thickenings of storedup nutriment at the bases of the stems it is enabled to survive periods of drouth. Leaf-smut occasionally attacks this grass and reduces the leaves to shreds covered with dusty brown spores.

A few of the flowering-heads of aftermath develop leaves from the tips of the scales and cover the spikes with tiny green blades, as if to shield the unripened seed from early frosts.

The common name of Timothy preserves that of its earliest cultivator, Timothy Hanson, a Maryland planter of the early days of the eighteenth century. He must have been a genial man, proving himself friendly, or we should have had Hanson Grass instead of Timothy, although the more local name of Herd's Grass need be considered no reproach to the Mr. Herd who cultivated it in New Hampshire long ago.

Throughout nearly the whole of North America.