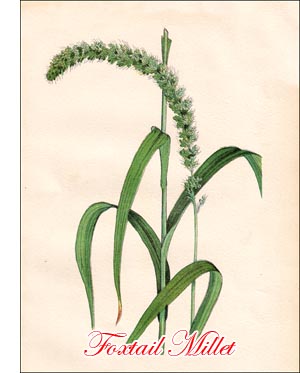 The seed of the Foxtail Millet varies in size. It is always smaller than the seed of Common Millet, but is of the same general shape, though the inner side is more decidedly flat. The colour varies with the variety, ranging from orange and yellow to grey and black. Sometimes different coloured seeds are found in the same variety. This is especially the case in Hungarian Grass, the seed of which varies from pale yellow to black; seeds of widely different colour may occur in the same plant and even in the same head. So far as is known, no satisfactory explanation of this fact has been offered. It may be the result of cross-fertilization and thus correspond to the similar phenomenon observed in corn.