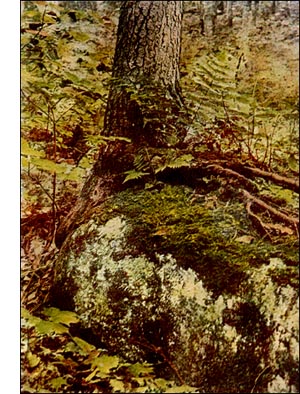 The species of the Genus Trematodon are short plants, sparingly branched and forming pale-green or dusky-brown tufts on the ground. The leaves are lance-shaped, tapering toward the apex; a vein is present, and the cells are large and long-hexagonal. The spore-cases are oblong slightly arched with a long neck (collum) once or twice as long as the spore-case. They have long-beaked lids with conical bases and are raised on slender pedicels 1/2 to 1 1/2 inches long.

A simple or compound annulus is present and a single row of sixteen red-brown narrowly lance-shaped teeth cleft to near the base into two unequal forks.

The generic name, compounded of two Greek words; a perforation and; a tooth, was suggested by the character of the teeth of one species, Trematodon ambiguum, which often have a cleft of perforation running of each tooth.

There are sixty-four species in all, two in the United States.